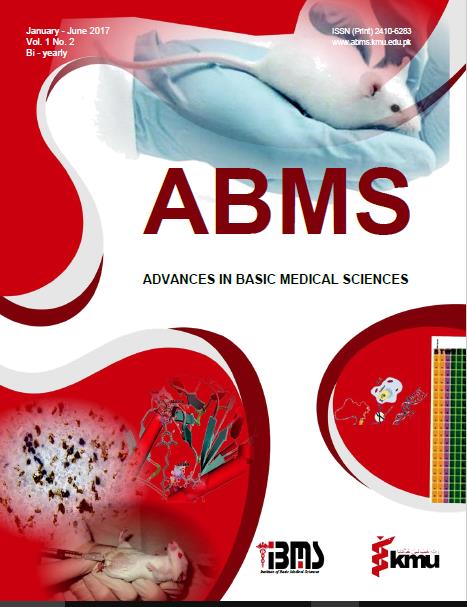 Measles has been a global health threat with about 30 million new cases each year. The disease has claimed 350 lives during 2013. The contributing factors for the high morbidity and mortality are poor socio-economic status, occasional immunization, and shortage of vac-cinators, unawareness, floods, and some inaccessible conflict areas1,2. Several epidemiological and phyloge-netic surveys have been reported worldwide but very little intervention has been carried out based on avail-able data. Information on measles circulating geno-types is required to distinguish the indigenous from the imported ones. This is important to eradicate measles from the region3.

Measles virus (MV) is a negative strand RNA of the genus Morbillivirus from family Paramyxoviridae. World Health Organization (WHO) has recognized 8 clades of MV (A-H) and 23 genotypes4. Some of these genotypes are associated with sporadic or epidemic outbreaks. For example, genotype D is linked to outbreaks in the United States, Pakistan and India5. In measles endemic countries one or two genotypes circulate in the commu-nity while in countries with high vaccination low genetic diversity is recorded6,7. Therefore, we think that genetic characterization is crucial for the management of the disease.

Measles is a febrile rash illness caused by Measles Virus which is transmitted via respiratory droplets, aerosols and close personal contact with infected na-sal or throat secretions. Measles is contagious during a specific period, that is, from 04 days before to 04 days after the onset of rash. A maculopapular rash appears 14 days after exposure and then begins to spread from head to trunk to extremities which may become conflu-ent. This lasts for about a week and fades in order of appearance. Symptoms of measles include fever (upto 105oF) cough, conjunctivitis, coryza (3Cs) and Koplik

spots (Enanthem). Complications of measles include diarrhoea, otitis media, pneumonia, encephalitis, Sub acute Sclerosing Pan Encephalitis (SSPE 1/100,000 cas-es) and death (1-3/1,000 cases). Despite widespread vaccination campaign, measles remains one of the lead-ing cause of child death worldwide4,8,9. There are es-timated 21.5 million infants worldwide who have not received MCV1, out of which almost 1/3 are in India (6.4 million) and Indonesia (0.7 million)10. However, many challenges restrict achieving measles elimination in this part of the world. The 66th session of the “Regional Com-mittee of the South-East Asia Region” has approved the goal of measles elimination in the WHO South-East Asia Region by 202011,12. In 2013, routine MCV1 coverage was <95% nationally for seven of the eleven countries in the region. In addition, more than half of the Supplemen-tary Immunization Activities (SIAs) implemented in the region during 2003–2013 could not achieve the target of ≥95% coverage13. As of 2015, all 11 countries in the South-East Asia Region had either developed or were drafting national plans based on the strategies outlined in the Global Measles and Rubella Strategic Plan.

Measles Containing Vaccine (MCV) licensed in 1963, is a live viral vaccine that has produced remarkable re-sults, has excellent safety profile with 50+ years of use (effectiveness 1 dose ≈93%, 2 doses 97%). Pakistan is the only country in the world without a clear health struc-ture and this could lead to even international isolation with probability of travel ban including ban on Pakistani pilgrimages visiting Kingdom of Saudi Arabia. In the re-cent measles outbreak in Pakistan, 14,000 cases and 306 fatalities were recorded14. Such figures indicate that at least 60% of children are not given even a single dose of the measles vaccine, while about 20% are served with only one dose. Pakistan is one of the top 5 countries in the world having the highest number of unvaccinated children14.

With 35 million surviving infants in the region of South East Asia (26% of the global total), the measles elimination goal is a significant opportunity to further decrease measles-related deaths and illness globally by 2020. If other countries in the region with similar resources can achieve the goals of elimination then it must also be implemented in Pakistan to get rid of this deadly but preventable disease. The adoption of a mea-sles elimination goal in Pakistan will be an opportunity to re-energize efforts and maintain momentum in the region to:

2.Optimize the timing of MCV1 and MCV2 doses based on regional measles epidemiology

5Initiate and establish collaboration with other pro-grams, including use of the measles. elimination plat-form to integrate rubella and congenital rubella syn-drome control efforts.

Hilleman MR. Current overview of pathogenesis and pro-phylaxis of measles with focus on practical implications.